is a special customer
Check out Availability Now

A Sporting Customer
is a special customer

Absolutely cheaper price and many other benefits ...
Click and find out the benefits right now
A Sporting Customer
is a special customer
Check out Availability Now

Rimini was founded by the Roman Empire as a colony of the Roman Jurisdiction in 268 BC on a pre-existing site between the Ausa and Marecchia Rivers, born as a gat and crossroad.

It became a Borough and was then registered into the Aniense tribe in the year 90 BC.

In AD359 it became a council headquarter by decision of the Emperor Costanzo II. In the VI century, prior to being conquered by the Lombards, it joined the alliance of the five Bizantin maritime cities. In the VIII century it passed under the Church rule.

In 1157 Federico Barbarossa and the Pope granted it municipal autonomy. It remained under the Malatesta rule until the end of the XIII century and on the XVI century it became part of Cesare Borgia's territories and next it was ruled by the Venetians. In 1509 the Church jurisdiction reclaimed it and it ended in 1860 by popular vote.

The city and its territory then joined the Kingdom of Italy.

Already known as the “Benedictine Church” in the IX century, It was later rebuilt in the XVI century. It holds an altar-piece by Paolo Veronese (1588) and on the third altar on the left hand side a mosaic by Bittino Da Faenza (1409).

The Gervasona Gate and the Malatesta Walls (Via Madonna della Scala)

The passage dates back to 1733, while the adjacent walls surrounding the ancient village “Borgo San Giuliano”, date back to the XV century.

Built in 1611 and restored several times. Above the altar there is a XVII century painting by the artist Alessandro Codrini.

Built between the XII and the XIII century, they were restored several times, mostly in the XV century. 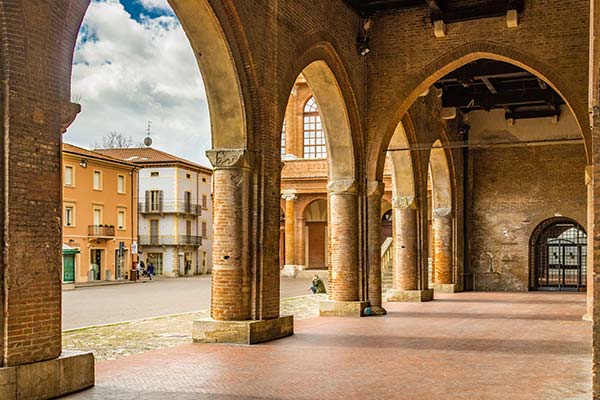 It is the popular name of the Gothic Arch that marked the entrance to the city near the Marecchia River. The only medieval door that is still existing even if it was partially buried. In the XV century it took the name of Porta Galliana. 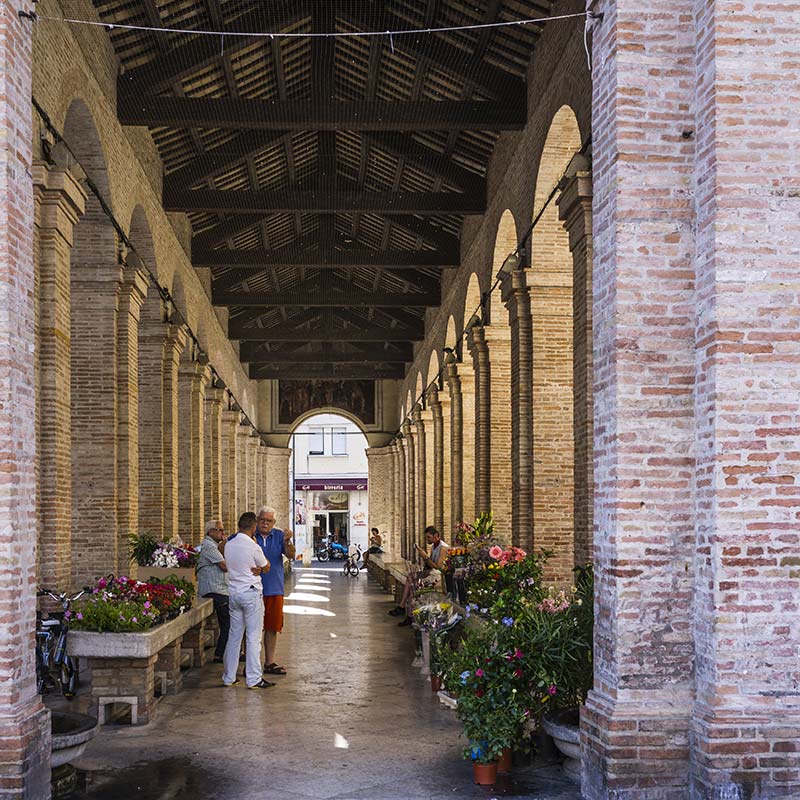 Built over the Marecchia River by order of Roman Emperor Augustus, it was later completed by Tiberius (14-21) AD. In Istria stone, it features five arches. Via Emilia begins here.

It was built between the year 1508 and 1510 by Monticolis. It was subject to a series of changes and it was subsequently seriously damaged during the war.

Originally annexed to the ancient hospital. It was rebuilt in the XVIII century and restored in 1987. 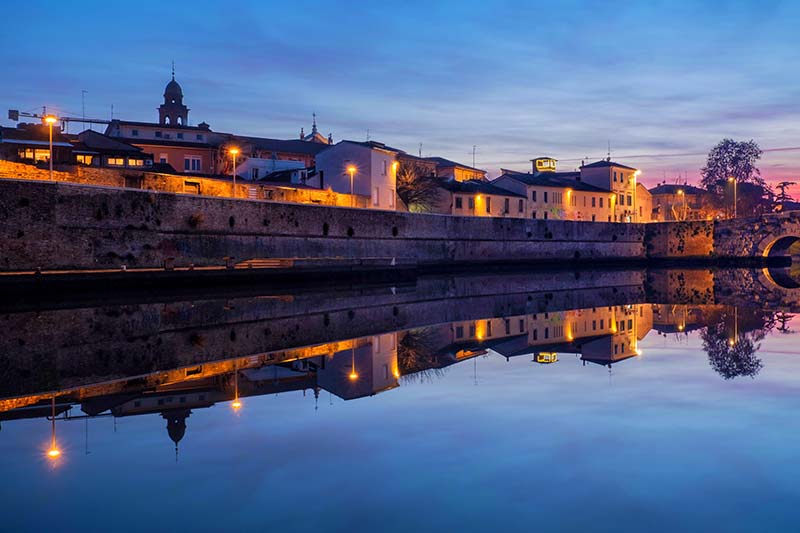 It dates back to the XIII century and it was rebuilt between the year 1775 and 1780; it was designed by Gaetano Stegani and decorated by Antonio Trentanove.

It hosts the office of the Mayor and the Municipal Administration. It was rebuilt in 1687 by Francesco Garampi from whom it takes its current name.

Built respectively in the XIV and XIII century and restored in 1924. 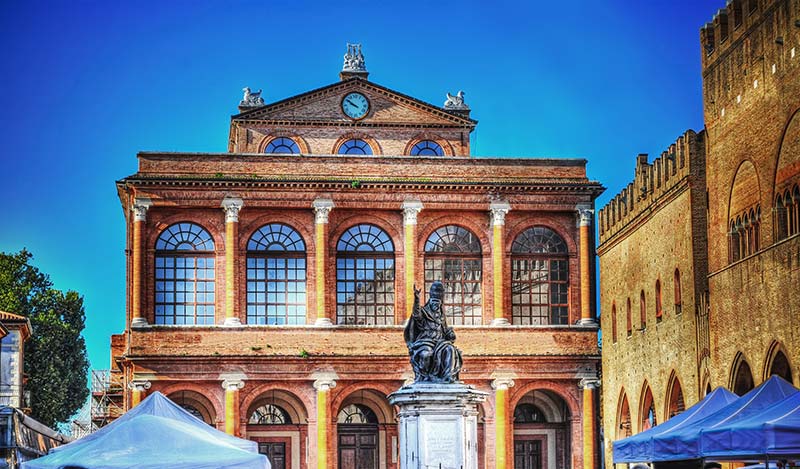 Built in 1614 by the local population as a token of gratitude. The bronze statue was created by Nicolo Cordier and Sebastiano Sebastiani. During the French invasion it was believed to be the Statue of San Gaudenzo, Bishop and martyr, patron saint of the city. It was restored in 1940.

The Fountain and the "Old Fish" Market (Piazza Cavour)

The fish market was built by order of the Municipality and designed by Giovan Francesco Buonamici in the year 1747. The fountain is probably of Roman Age origins, but its current shape dates back to the Middle Ages. 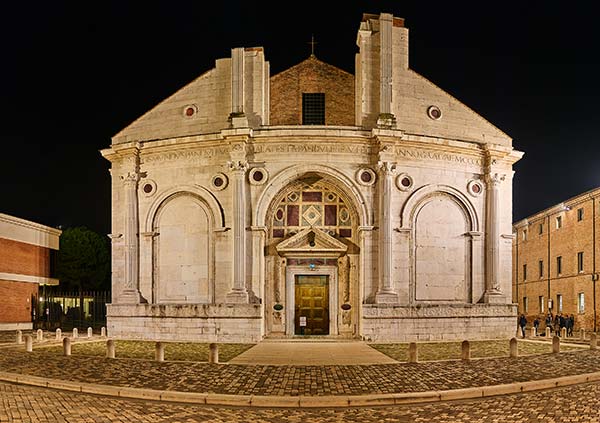 Thought out as part of the Poletti's plan between the year 1843 and 1856. Its grand opening took place in 1857 with "Aroldo" by Giuseppe Verdi. After the war only its beautiful neoclassic facade and the marvellous "Hall Ressi" survived entirely until today.

A majestic palace built between the year 1437 and 1446 by Sigismondo Malatesta who wanted it named Sigismondo Castel. Only the core area survived to our days while the bastion and moat were destroyed in the XIX century. At the moment it is under restoration and it hosts the Museum of Extra-European Cultures. Access is from the Ring Road West. 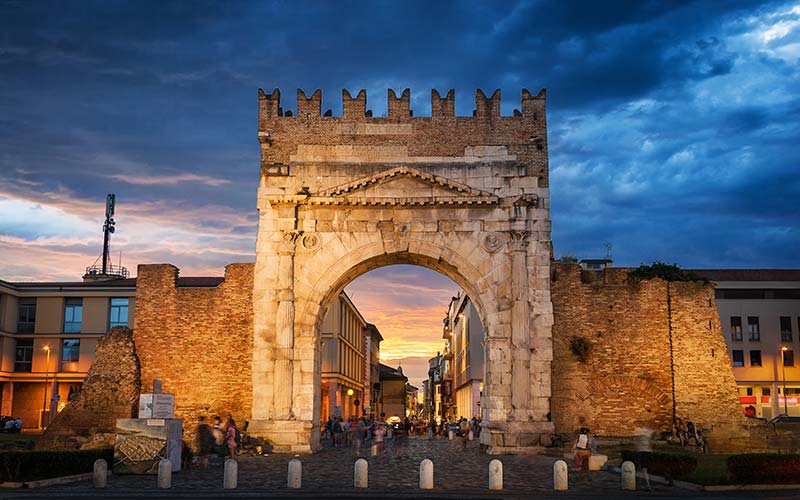 It dates back to the XIII century and it represents the ancient Cathedral of Rimini, destroyed at the beginning of the nineteenth century.

Built according to Alessandro Gambalunga’s will in 1610, it was donated to the Borough and annexed to the Public Library in 1619.

It is among the most ancient and important libraries in Italy.

The City Museum (Via Tonini, 1)

The structure, under restoration, was once the College of Jesuits and it was built by Alfonso Torreggiani in the year 1749. It hosts the artistic and archaeological collections of the city and it is particularly rich of Roman mosaics as well as Baroque and Renaissance frescos.

Once an ancient bazaar that belonged to the hospital of Our Lady of Mercy/Graces of Venice. The structure maintained many of its XV century features. 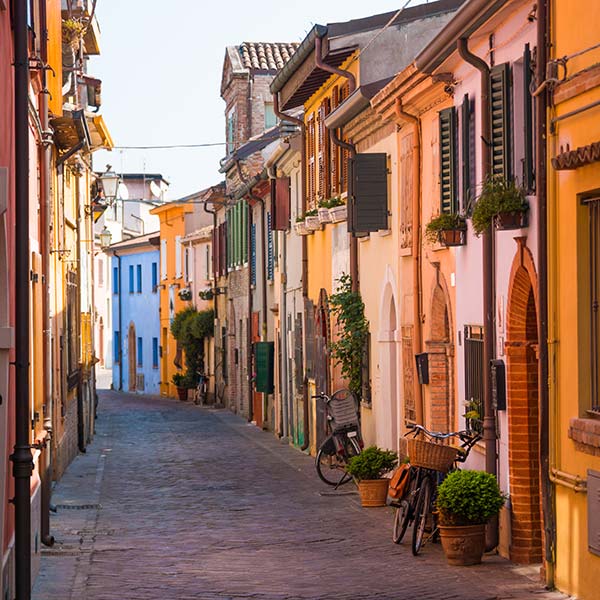 The Crocina Oratory (Via Francolini)

It was built in the VI century. It was rebuilt in the year 1713, but it was severely damaged during the war. 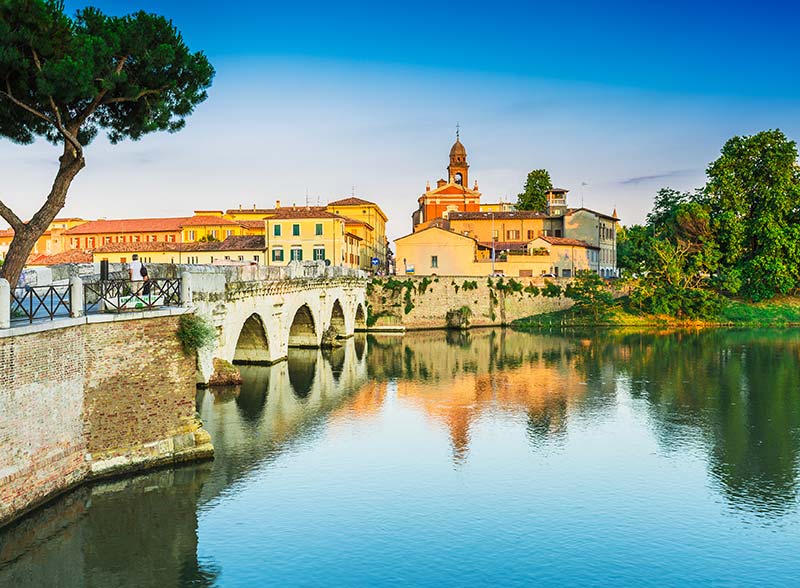 The Franciscan Church, rebuilt and expanded by Sigismondo Malatesta around the year 1446 and 1460 but it was never completed. The external structure is by Leon Battista Alberti.

The interior hosts sculptures by Augustino di Duccio, a cross painted by Giotto and an altar by Giorgio Vasari. It is the Rimini Cathedral since 1809.

Montanara Gate (Via Guerrazzi – close to the Tempio Malatestiano)

Located the end of the old road (now Via Garibaldi) it comprises two barrel arches and it dates back to the Age of Silla. It was almost destroyed during the war; the remaining barrel arches have been recovered and temporarily rebuilt on site.

A XVI century structure, almost completely rebuilt after the earthquake of the year 1672 to commemorate the miracle of the female mule that Sant'Antonio da Padova operated in the plaza. 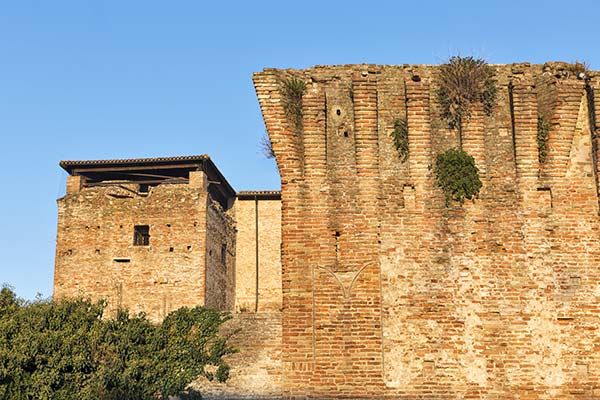 A XVI century structure, almost completely rebuilt after the earthquake of the year 1672 to commemorate the miracle of the female mule that Sant'Antonio da Padova operated in the plaza.

This plaza, an ancient Roman forum, always featured an arcade. The current one, located upstream the river, is partially medieval.

Built in the XIII century by the Augustinians it took its name by San Giovanni Evangelista and it was renovated in the XVIII century thanks to the effective work of Bologna-school artists. In the apsis and in the chapel below the bell tower it is possible to admire Rimini-school frescos dating back to the XIV century. 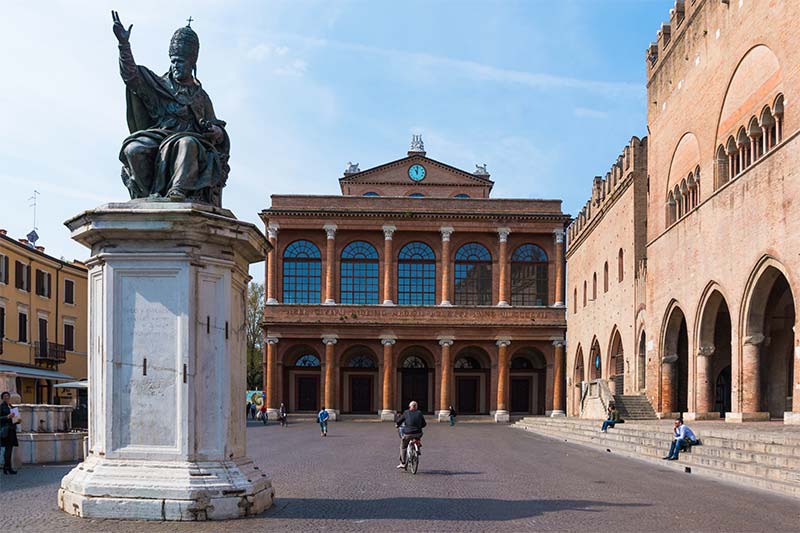 Do not miss our exclusive offers